How to get >99.5% unit-to-unit spectrum agreement

Variety may be the spice of life, but variability is not – particularly for OEM instrument developers who must guarantee an answer based on the quality of a Raman spectrum. These answers matter, to their customers and to those affected by the decisions made based upon those outputs. A good-quality OEM spectrometer should, by design, exhibit low unit-to-unit variability from the start, and any remaining small differences should be corrected in order to achieve the most robust and repeatable analytical outcomes in the field. In this Tech Note, we demonstrate a method to correct for slight variations in the wavenumber and intensity response of multiple units, achieving better than 99.5% agreement between any two spectrometers across seven Raman spectrometers of the same model and configuration.

The Need for Reproducibility 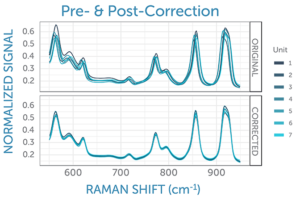 Application-specific instruments based on Raman designed by original equipment manufacturers (OEMs) are required to deliver consistent answers, day in and day out, regardless of the serial number of the unit or where in the world it is being used. While method development, sample handling, and algorithm development are essential groundwork to achieve this, Raman applications also depend on a high degree of unit-to-unit reproducibility of the instrument itself.

So how can you ensure that the same spectrum is collected from many instruments when each unit is individually aligned and optimized? With many optical, mechanical, and electronic parts in every instrument, there will always be some unavoidable differences in their spectral response when built in volumes of 10, 100, or 100,000 – no matter how exacting the quality control or how carefully aligned.

Some degree of variability can be eliminated through good optical design. For example, the all-transmission optical design of Wasatch Photonics spectrometers yields a very low sensitivity to small changes in the alignment angles. Together with the consistent nature of the VPH gratings employed, these designs yield a high degree of reproducibility out of the box. It is for this reason that all-transmission spectrometer designs are preferred by many OEMs over the reflective optics, replicated gratings, and asymmetrical, folded optical path used in crossed-Czerny Turner spectrometers. (Learn more in our tech note on Extending Raman’s Reach.)

Even with the best possible design and good manufacturing practices, small differences in the spectral sensitivity and the wavenumber axis will still remain. For Raman applications such as spectral matching to a common library, removing these minor differences can lead to a significant improvement in the overall unit-to-unit reproducibility, and ultimately, yield consistent spectral analyses with any instrument. Fortunately, only two corrections are needed to eliminate these minor spectrometer differences almost completely, leading to astonishing unit-to-unit reproducibility to satisfy even the most demanding OEM applications.

The US Pharmacopoeia1 for Raman instruments highlights three areas of importance for the proper calibration of a Raman spectrometer: the primary wavelength (x-axis), the intensity (y-axis), and the laser wavelength.

During calibration, the position of a pre-defined set of emission peaks is determined in pixel space and the known emission wavelengths are fit with a polynomial function as a function of these measured pixel positions. The resulting calibration coefficients are saved in the spectrometer’s EEPROM to be read and applied when the spectrometer is connected to the computer. Users can check the accuracy of the wavelength calibration with suitable atomic emission sources. The calibration itself, however, should only be performed at the factory.

A calibration of the intensity axis is required to achieve reproducible peak height ratios for Raman spectra. All spectrometers are individually aligned and optimized during production, and while Wasatch Photonics’ own transmission optics lead to very low sensitivity to alignment parameters, small differences in the overall spectra response of different spectrometers still remain.

The intensity calibration is performed according to ASTM E2911-13 (2013)2 with a standard reference material sample (SRM), which, when illuminated with the Raman laser, emits a broadband fluorescence spectrum of a well-known shape. Raman SRM materials are typically a solid block of glass of well-known composition, and are much simpler to use than the radiometric calibration lamps or ‘gold standards’ used in UV-VIS-NIR spectroscopy.

The measured emission spectrum of the SRM is compared to the expected emission spectrum, and the ratio between the two spectra defines the spectral intensity correction factor at each pixel. This calibration is performed in production at the factory, during which the smooth spectral response curve of the spectrometer is fit to a functional form. The spectral response profile parameters are saved in the spectrometer’s EEPROM, from which they can be read by the software to apply the intensity correction.

Users can check the accuracy of the intensity correction with the intensity ratio of two peaks of a reference substance, such as those published in ASTM 1840-96 (2014)3. However, the peak height ratio for two peaks in a Raman spectrum can depend on the optical resolution (linewidth) of the instrument, for example for a compact Raman system with limited optical resolution: As the area under the curve for each spectral line remains constant, if lower resolution broadens a peak, it also reduces peak height. This is important to keep in mind when comparing experimental peak height ratios to literature values measured with high-resolution bench top instruments.

The final calibration to be performed at the factory is the determination of the exact excitation laser wavelength. Lasers with a given (nominal) Raman wavelength are specified to fall within a wavelength range of typically ± 0.5 nm, which at a Raman excitation wavelength of 830 nm corresponds to a Raman shift of about 7 cm-1. For best accuracy, the exact laser wavelength therefore needs to be determined using the well-known Raman peaks of a reference substance, ideally one published in ASTM 1840-96 (2014)3, for which the peak positions are defined to better than 1 cm-1 wavelength accuracy.

For highest accuracy spectroscopic measurements, it is necessary to account for the small, but noticeable, day-to-day overall variations in the entire system. This correction to the final wavenumber axis captures any minor changes in the laser wavelength, spectrometer wavelength calibration, or other minor shifts of the spectrum, for example due to external temperature changes. Raman instruments at every performance level have been shown to require a day-to-day correction to achieve reliable standardization of Raman spectra for transfer of spectral libraries across instruments4.

This correction is performed with a single, additive, wavenumber offset that is determined completely analogous to the laser wavelength calibration described above. The average deviation between known Raman peak positions to the peak positions measured for this day-to-day reference standard is applied as an additive correction to the entire Raman spectrum. This correction is typically performed using a reference standard such as polystyrene, in compliance with USP chapter <1120>5 or EP chapter <2.2.48>6. The resulting corrected wavenumber axis then yields high Raman shift accuracy and hence excellent unit-to-unit reproducibility of peak positions. 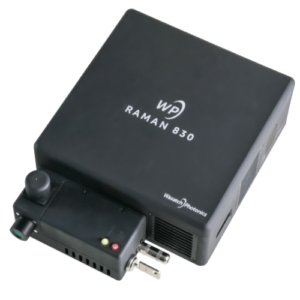 With a firm understanding of the method, we can now demonstrate the intensity calibration and wavenumber correction for a set of seven different, but identically designed and configured, 830 nm Raman systems with integrated laser and probe optics (WP 830-L). A sample solution of glucose in water inside a polystyrene cuvette is inserted into the sample holder, which in turn is directly attached to the front lens of the spectrometer. Glucose in water was chosen as the demonstration sample due to the complex, nature of its Raman spectrum with multiple peaks across a wide wavenumber range.

The wavelength calibration has been performed during production and is used as is.

The sample solution used in this example is contained in a polystyrene cuvette, a material that is listed as one reference compound in the ASTM publication3. Two polystyrene peaks at 1001.4 cm-1 and 1602.3 cm-1 (ASTM) are used as the wavenumber reference, as these peaks are sufficiently separated from any sample peaks occurring due to the glucose in water.

The resulting average wavenumber correction shift values vary from -4 cm-1 to +2 cm-1, depending on the unit. The majority of this adjustment was due to use of the nominal laser wavelength (830.0 nm) in the original acquisition. After this wavenumber correction, the position of any glucose peak from any of the seven test spectrometers deviates by less than 0.5 cm-1 from the mean position, which is less than a quarter of a pixel on the array detector, and indicative of the high accuracy of the wavelength calibration.

The wavenumber correction leads to a significant improvement in the agreement of peak positions between the sample spectra recorded with different spectrometers.

As a demonstration of how to perform the intensity calibration, we measure the emission from a standard reference material sample specific to the 830 nm laser wavelength (SRM 2246). A full list of available relative intensity correction standards for Raman spectroscopy can be found at the NIST website SRM Home and ASTM E29111-13 (2013)2. The emission spectrum for SRM 2246 was measured for each individual WP 830-L spectrometer, normalized, and compared to the expected (normalized) emission spectrum as specified by NIST.

OEM applications demand a high degree of unit-to-unit agreement between individual spectrometers in order to deliver consistent, dependable answers in the field. However, due to their complex optics, even identically designed, configured, and calibrated spectrometers experience some variation in their spectra. This can easily and effectively be corrected through intensity and wavenumber corrections, thus standardizing the response of all units prior to application-specific analysis of the spectra.

By starting with a sensitive, robust Raman spectrometer design and applying these simple corrections, we show that any two spectrometers of the same configuration can be made to measure the same complex spectrum with exceptional overall agreement. This straightforward correction process makes it possible to use common matching libraries or universal chemometric models for entire series of spectrometers with high accuracy.

At Wasatch Photonics, we work collaboratively with our OEM customers at every stage of the development process to integrate our ‘OEM by design’ solutions and best manufacturing practices for Raman applications with their unique applications expertise, instrument design expertise, and market knowledge & reach to create instruments that are sensitive, robust, and reproducible. Contact us today to discuss your unique Raman needs! 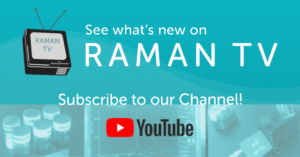