This tutorial provides a brief introduction to the principles of Optical Coherence Tomography (OCT). It covers the basic theory, an introduction to Fourier domain OCT, and the difference between swept-source OCT (SS-OCT) and spectral domain OCT (SD-OCT). It also defines the key parameters for OCT systems, providing useful equations for calculating resolution, imaging depth, and sensitivity with depth, as well as discussing performance parameters like signal to noise ratio (SNR) and speed.

Optical coherence tomography (OCT) is a 3-D imaging technique that can provide high resolution imaging in a scattering media, non-destructively and without the need for contact or a coupling medium. Lateral imaging resolution on the order of a few micrometers is possible, to depths up to few millimeters. 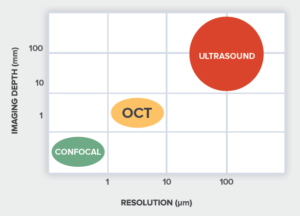 OCT’s ability to provide surface profiles and information about subsurface structure and uniformity enables it to deliver accurate information in real time for diagnostics, monitoring, and in-situ process feedback. As a result, it has found applications in ophthalmology, dermatology, angiography, and other types of biological imaging. It is also a powerful and efficient alternative to ultrasound for material inspection and non-destructive testing, delivering video-rate acquisition at up to 30 images per second.

How does OCT work?

OCT relies on back-scattered light from different regions of a sample to generate a 3D image. It uses different localization techniques to obtain the information in the axial direction (along the optical beam or into the sample, z-axis) and the transverse direction (plane perpendicular to the beam or across the sample, x-y axes). The information in the axial direction is obtained by estimating the time delay of light reflected from structures  or layers in the sample. This technique is similar to that which is used to generate an ultrasound image, with light being used instead of sound. Given the high speed of light, it is not easy to perform a direct measurement of the time delay for the back-scattered light. Instead, O­­­­CT systems indirectly measure the time delay using what is called low-coherence interferometry.

From interferometry to images

In a low-coherence interferometer, a light source with a broad optical bandwidth is used for illumination (see Figure 1). The light coming out of the source is split by a beam splitter into two paths called the reference and sample arms of the interferometer. The light from each arm is reflected back and combined at the detector. An interference effect (fast modulations in intensity) are seen at the detector only if the time travelled by light in the reference and sample arms is nearly equal. Thus the presence of interference serves as a relative measure of distance travelled by light.

Optical coherence tomography leverages this concept by replacing the mirror in the sample arm with the sample to be imaged (Figure 2). The reference arm is then scanned in a controlled manner and the resulting light intensity is recorded on the detector. The rapid modulation interference pattern occurs when the mirror is nearly equidistant to one of the reflecting structures in the sample, and can be processed to register the presence of that structure. The distance between two mirror locations where interference occurs corresponds to the optical distance between two reflecting structures of the sample in the path of the beam. Even though the light beam passes through different structures in the sample, the low-coherence interferometry described above helps to distinguish the amount of reflection from each unique structure in the path of the beam. In doing the so, the material scattering, and hence structure, can be measured as a function of depth.

Exploring the transverse or x-y localization of the sample structure is simpler. The broadband light source beam that is used in OCT is focused to a small spot (on the order of a few micrometers) and scanned over the sample. By mapping the sample in x and y with a scanning arm while collecting depth information using interferometry, a complete 3D picture of the sample can be constructed.

Fourier-domain OCT (FD-OCT) provides an even more efficient way to implement the low-coherence interferometry described above. Instead of recording intensity at different locations of the reference mirror, the intensity is recorded as a function of  the wavelengths or frequencies of the light. The intensity modulations when measured as a function of frequency are called spectral interference. The rate of variation of intensity over different frequencies is indicative of the location of the different reflecting layers in the samples. It can be shown that a Fourier transform of spectral interference data provides information equivalent to that which would be obtained by moving the reference mirror (Figure 3).

There are two common methods of measuring spectral interference in OCT: spectral-domain and swept-source. In spectral-domain OCT (SD-OCT), a broadband light source delivers many wavelengths to the sample, and all are measured simultaneously using a spectrometer as the detector. In swept-source OCT (SS-OCT), the light source is swept through a range of wavelengths and the temporal output of the detector is converted to spectral interference.

Fourier-domain OCT allows for much faster imaging than scanning of the sample arm mirror in the interferometer, as all the back reflections from the sample are being measured simultaneously. This speed increment introduced by Fourier-domain OCT has opened a whole new arena of applications for the technology. Live video, in-vivo OCT imaging can be easily obtained using commercial systems, allowing it to be used for process monitoring and guided surgery.

where λ is the central wavelength and Δλ is the bandwidth of the source. It should be noted that this is the spectrum measured at the detector and may differ from the spectrum of the source, due to the response of optical components and the detector itself. The above equation holds only for Gaussian spectra. For a spectrum of arbitrary shape, the axial spread function should be estimated to understand the achievable resolution and any artifacts like side lobes. Plots of the axial resolution equation for three different central wavelengths is found in figure 5, showing how axial resolution is affected by bandwidth of the source for different common operating bands in the near infrared.

The imaging depth of OCT is primarily limited by the depth of penetration of the light source in the sample. Additionally, in Fourier-domain OCT, the depth is limited by the finite number of pixels and optical resolution of the spectrometer. As previously mentioned, the image in FD-OCT is obtained after Fourier transformation of the spectral interference data. The total length or depth after Fourier transform is limited by the sampling rate of the spectral data, and is governed by the Nyquist theorem. A total bandwidth (Δλ) sampled by N pixels gives us a wavelength sampling rate of δλ = Δλ/N. Since a Fourier transform relates frequency to time, we can convert wavelength to frequency, δν = c*Δλ /λ2. The Nyquist theorem indicates that the maximum time delay in the Fourier transformed data will be tmax = 1/2* δν, and the maximum depth in the data will be zmax = c* tmax. By combining these, the maximum imaging depth achievable in FD-OCT is:

Loss of sensitivity with depth

Signal to noise ratio is generally defined as the ratio of signal power to the noise level or power. Being a statistical quantity, noise power is defined by its variance. There are three main sources of noise that dominate OCT:

An ideal system has minimal detector and intensity noise and operates in the shot-noise domain. The performance of such a system is limited by the number of photons arriving at the detector.

Sensitivity in OCT refers to the ability of the system to detect the faintest amount of back-reflection from the sample under observation. Numerically it is the attenuation in the signal that results in a signal to noise ratio (SNR) of 1 (i.e., the point at which the signal level is equal to the inherent noise of the system).

Signal to noise ratio or sensitivity is often defined in decibels (dB). In general the dB unit of a physical quantity corresponds to 10*log(Pa/Pb). When dealing with optical light measurements the power in question should be carefully considered. The light power (P) is proportional to the current output of a photodetector (I), however the electrical power is proportional to I2 hence the SNR and sensitivity measurements in OCT when considering optical power are given by 20*log(Pa/Pb). In general, while stating values in dB, clear distinction should be made if the quantity in consideration is optical or electrical power.

The speed of an OCT system depends on several factors. The first being the amount of light received on the detector. Speed is directly related to the time the system needs to accumulate enough photons for a good signal to noise ratio. . The other limitations on speed are the system parameters themselves. For a spectrometer based spectral-domain OCT system the speed of the camera sensor and electronics are usually the limiting factor. For swept-source Fourier-domain OCT the speed of the swept source laser is often the limiting speed.  While SS-OCT is often chosen for its speed, advances in camera speed in recent years have begun to close that gap.

If you’d like to learn more about OCT as a technology and its many applications, we encourage you to explore a few of our favourite resources in more detail. You are also welcome to visit our OCT image gallery to see the amazing images possible with OCT. If you think OCT may be the right fit for your research, clinical, or industrial application, we’d be happy to talk more about the possibilities. Contact us and mention our tutorial!

This website uses cookies to improve your experience while you navigate through the website. Out of these cookies, the cookies that are categorized as necessary are stored on your browser as they are essential for the working of basic functionalities of the website. We also use third-party cookies that help us analyze and understand how you use this website. These cookies will be stored in your browser only with your consent. You also have the option to opt-out of these cookies. But opting out of some of these cookies may have an effect on your browsing experience.
Necessary Always Enabled
Necessary cookies are absolutely essential for the website to function properly. These cookies ensure basic functionalities and security features of the website, anonymously.
Not Necessary
Any cookies that may not be particularly necessary for the website to function and is used specifically to collect user personal data via analytics, ads, other embedded contents are termed as non-necessary cookies.
Powered by