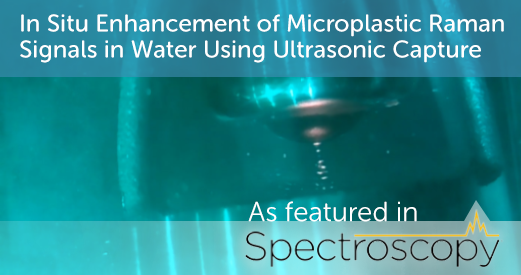 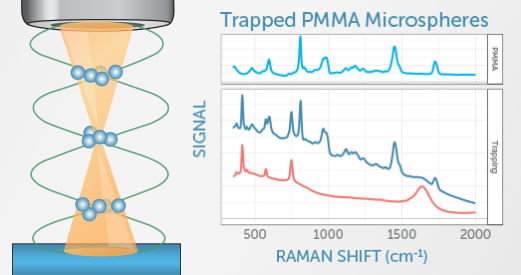 The accumulation of microplastic particles in our oceans, lakes, and drinking water has gained increasing attention in recent years as scientists realize how widespread this problem is. Although awareness has been raised, there does not yet exist a rapid, on-site testing method with the sensitivity and repeatability needed to identify or quantify the smallest, most abundant particles. In this study, we partnered with usePAT GmbH to combine the power of compact, portable Raman spectroscopy with the convenience of ultrasonic particle capture to test a new ‘trap and detect’ method that may prove faster, easier, and far more convenient than the current ‘filter and scan’ method used in most Raman-based studies of microplastics.
Microplastic particles captured in the nodes of a standing wave created using an ultrasonic resonator and a Raman probe.

This technique uses an ultrasonic resonator, soniccatch by usePAT to create a standing acoustic wave with a Wasatch Photonics Raman probe, capturing particles in the sample solution for direct detection through overlap with the focus of the Raman probe. Testing with a 90 ppm solution of 3.4 µm PMMA microspheres showed a clear and distinctive growth of the PMMA Raman signal as the particles were captured, leading to signal enhancement through ultrasonic capture of greater than 1500x. With further development, this method shows promise for rapid, on-site detection of microplastics using a compact, portable system.

Read the entire article at spectroscopyonline.com 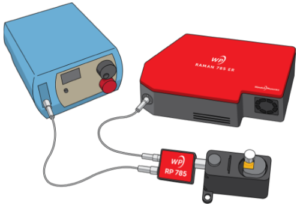 Learn more about the products used for these measurements: