A creative group of researchers has performed single-shot measurements of ultrafast extreme ultraviolet (EUV) pulses for the first time ever at the FERMI Free Electron Laser (FEL) source in Italy – and these sources aren’t easy to measure. FELs emit intense laser pulses that last less than 100 fs and are composed of wavelengths deep in the UV, well beyond the range and speed of any conventional detector. Furthermore, their characteristics can vary considerably from one pulse to the next. By cleverly adapting the FROG technique used to measure ultrashort lasers at visible wavelengths, the team was able to extract both spectrum and pulse shape, paving the way for further development of FEL sources and benefiting research studies performed using this light. Read on to learn more about how they did it, and the role that Wasatch Photonics grisms played in bringing these exotic pulses to light.

Free electron lasers (FELs) are capable of generating very intense pulses of light on extremely short time and length scales, providing unique opportunities to explore the structure and transient states of matter for research in biology, chemistry, and materials science. FELs are located at synchrotron facilities around the world, providing opportunities for interdisciplinary collaboration to further our understanding of matter.

An FEL begins by using an electron beam moving through a periodic magnetic field to generate synchrotron radiation. This light then re-interacts with a ‘bunch’ of electrons within an undulator of opposing magnetic poles to stimulate coherent emission analogous to the amplification that occurs in a laser cavity. This method can be used to generate light as short as a few nanometers, with pulse lengths less than 100 fs.

Since typical electronics are far too slow to measure femtosecond timescale pulses, the light-matter interaction of nonlinear optics is often used to provide a fast shutter for diagnostics of FELs, i.e., the response of a material to the ultrashort pulse is used for detection. In fact, a complete set of information about the electric field can be recovered using a technique called Frequency Resolved Optical Gating (FROG), yielding both the optical spectrum of the light, and the pulse shape in time [2]. This method is routinely used for diagnostics of visible ultrafast lasers, but becomes more challenging at short wavelengths like EUV.

Those who work in short pulse physics and nonlinear optics are used to overcoming challenges, however, and that’s exactly what a collaboration between researchers at Los Alamos National Lab, Georgia Institute of Technology, and FERMI FEL source in Italy did [1].

First, they used something called a transient grating to shift FROG detection from the EUV to the visible part of the spectrum, where cameras are readily available and easy to use – a technique aptly named XFROG [3]. To create a transient grating, the EUV beam from the FEL was split in two, then crossed and recombined at a small angle to generate an interference pattern in a piece of silicon nitride film, creating a ‘transient grating’ that exists only while the FEL beams are present. (In fact, at Wasatch Photonics, we use a similar interference pattern to image the desired line structure into our gratings, which is why we can provide such a wide range of customized line densities. But in our case, the laser light we use changes the material structure permanently.)

In XFROG, the transient grating created by the crossed beams can then be used to diffract an optical probe beam of visible light at 397 nm much in the same way light is diffracted by a WP holographic grating, collecting information about the glass material response and the EUV pulse in the process. This information-rich visible light is much easier to detect and interpret with an imaging spectrometer.

Second, the team needed to overcome limitations in time resolution that would have made it impossible to measure pulses shorter than 1 ps – more than 100x too slow for the EUV pulses to be analyzed. To do this, they used a Wasatch Photonics grism to introduce an effect called ‘pulse-front tilt’ in the optical probe beam, making one side of the beam arrive earlier than the other. Since the optical probe beam had to come in at a steep angle to the silicon nitride film to create the transient grating, the two tilts were made to cancel out so that the optical pulse front would arrive parallel to the film surface, regaining the lost time resolution.

Third, they created a fast time-gate by scanning the delay between the two EUV beams. In conventional FROG, the pump-probe beam delay would be scanned, with a nonlinear process called four wave mixing (FWM) providing a near-instantaneous material response that acts as a shutter. At EUV wavelengths, however, photoionization is the dominant process, with recovery on the order of picoseconds – an effect that blurs detection. FWM does still occur, but only near time zero. Since the transient grating is created only when both EUV beams are present, or only so long as the material ‘memory’ of the first beam survives until the second beam arrives, scanning the delay of one pump beam through the other in time creates a near-instantaneous response analogous to the FWM used in conventional FROG, and which can be modeled to extract the needed information at detection. 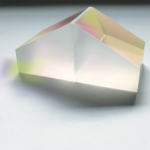 The grism used to introduce pulse-front tilt to the 397 nm optical probe beam in this experiment was custom-built at Wasatch Photonics. It was composed of an 1870 lines/mm VPH grating layered between two 42° prisms, a structure which avoids angular deviation of the optical probe beam. Our R&D team worked with the LANL researchers to design it.

Never heard of a grism? Learn more about grisms here.

Success in a Single Shot

By tackling each limitation in turn and modifying conventional FROG pulse measurement techniques, the team was able to transfer the FEL pulse measurement to more easily detected visible wavelengths, and also sharpen the time resolution to a fs time scale. The diffracted optical probe beam generated could then be spectrally resolved using another Wasatch Photonics grism and imaged onto a detection camera. The resulting FROG trace with spectral information along one axis and time delay between the EUV beams on the other axis provided all the information needed to mathematically reconstruct the characteristics of each individual pulse, from optical spectrum to its temporal pulse shape and phase.

Applying this modified XFROG technique to 31.2 nm light generated at the FERMI FEL source, a pulse length of 71 ± 6 fs in duration was measured, very close to the predicted 70 fs, and with a retrieved spectrum in good agreement with independent measurement. The technique also showed promise for analysis of modified EUV pulses, which could enable more sophisticated control over the light generated by FEL sources. Best of all, this novel approach using photoionization for detection should also be applicable to single-shot measurement of even shorter wavelength ultrafast light sources – even into the x-ray regime.

Small Hops in FROG, One Big Leap for EUV Light

Science is both an incremental and collaborative process, in which each new piece of research adds to the structure of our understanding and the toolkit we have to further it. The development of photoionization-based XFROG (dare we say PIXFROG?) demonstrates the ingenious way that optical physics is regularly applied by adventurous teams around the world to further our ability to understand matter and its interactions. And for Wasatch Photonics to contribute custom grisms to make this kind of innovation possible – well, we couldn’t be more delighted.

Note from the author: Nonlinear optics and ultrafast laser physics involve incredibly fascinating but also very complex processes – even more so at extreme wavelengths like EUV. Many of these ideas have been simplified for the purpose of this article to give a broader audience access to the unique achievements of this work. I mean, who could imagine that anyone could find a way to ‘see’ light pulses so short in time and wavelength that they can be used to measure reactions? But for the full story on XFROG and  pulse-front tilt tricks, I refer you to the original publication and the many excellent references cited within. I also give a special thanks to Swamp Optics for the many excellent FROG-related tutorials on their website – their founder was one of the authors on this paper, Rick Trebino!  — Cicely Rathmell, Wasatch Photonics

This site uses functional cookies and external scripts to improve your experience.

NOTE: These settings will only apply to the browser and device you are currently using.